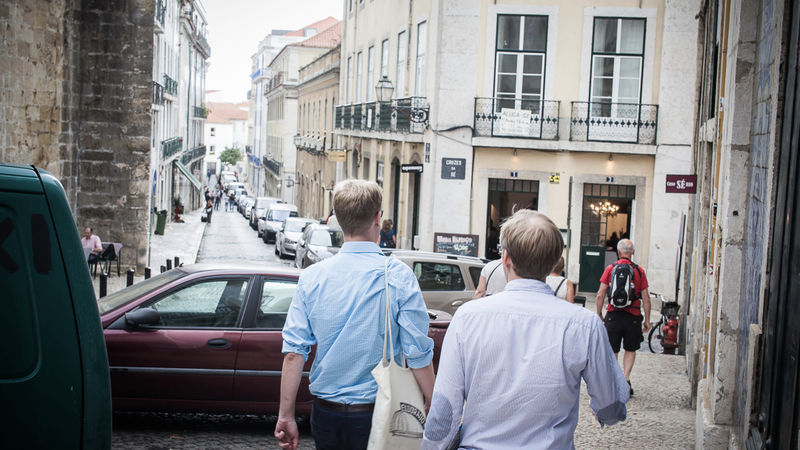 Photo: Authors Nicolai Strøm-Olsen (left) and Hermund Haaland (right) in Lisbon during the production of the book Startup Europe in 2016.

Startup Europe was released in 2016 after extensive research trips made to the cities of London, Talinn, Lisbon, Oslo, and Berlin. Authors Hermund Haaland and Nicolai Strøm-Olsen presents the ecosystems of of the cities visited and what we may learn from them, in addition to meeting young entrepreneurs to hear of their success and failures. Among them is Gleb Tritus from Lufthansa Innovation Hub in Berlin. The book was dispersed to more than 5000 students in Europe.

The book is published by Skaperkraft`s Frekk publishing and may be purchased for kindle format here and for the hardcover edition by contacting the author on hermund@skaperkraft.no

Startup Israel follows in the style of Startup Europe, albeit this time the booming startup ecosystem of Israel is described. Launched under Oslo Innovation Week, authors Hermund Haaland and Nicolai Strøm-Olsen draws out best practice from what is called "wadi valley" in the country where startups make up a steady growing percentage of the GDP. Well known Israeli entrepreneurs such as Jon Medved of Ourcrowd and Sivan Yavari of Innovation Africa is featured.

The book is published by Skaperkraft`s Frekk publishing and may be purchased for kindle format here and for the hardcover edition by contacting the author on hermund@skaperkraft.no

2018: Slavetech - a Snapshot of Slavery in a Digital Age

Combatting modern slavery means changing how people think about bondage today. As long as our understanding of slavery is rooted in the past we miss the terrible crimes that may be happening right in front of us. Today, many of these abuses take place in cyber-space, a shadowy digital world beyond our laws and human rights conventions. At the same time the digital revolution promises new ways to fight slavery and free slaves. Catharina Drejer and Kevin Bales explore this new world and much much more. We all use our digital tools every day, but if you want to know their power to fight slavery then you need #SlaveTech: A snapshot of slavery in a digital age.

Populist movements are changing the face of European politics. Is God a populist? looks at their strategies to attract voters by claiming to defend Europe's Christian heritage. It asks bold questions about whether these new populists can be trusted, to whom their Christian messaging appeals, and how Europe's established parties, the European public and churches should respond. The book was edited by Dr. Susan Kerr and includes contributions from one of Europe´s most outstanding theologians, Jürgen Moltmann, among others.

For hard-cover editions, send an e-mail to hermund@skaperkraft.no